Geography has always challenged industrial growth in Cape Verde.  Only half a million people are scattered across nine inhabited islands and there are not many natural resources. The country’s economic activity, based mainly on light manufacturing, depends heavily on imports and contributes only moderately to the country’s wealth. The combination of insularity and reduced market size does not provide the necessary scale for foreign industrial investment either.

In light of these natural constraints, many skeptics doubted of the viability of the country before its independence. But the future proved them wrong. Cape Verde gained international credibility and bet on the services sector development. Tourism now accounts for almost one quarter of the country’s GDP.

Only four of the archipelago’s ten islands have sufficient arable land for agriculture, and their combined production accounts for less than 10% of the national economy. In response, the Government has built four dams and, in the coming years, up to 17 more will contribute to enhanced self-sufficiency. This will lighten the load of imports, which currently account for almost 75% of all food consumed in the country.

The subsoil is devoid of gas or oil and contains only small quantities of minerals. However, Cape Verde has boldly sought in the sky what it doesn’t have underground. The Cabeólica windfarm project was awarded the 2011 Best Renewable Project in Africa. Cape Verde has also signed a memorandum of understanding with Germany for the development of further wind and solar facilities, with the aim of attaining 100% energy green status by 2050. 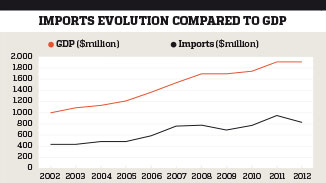 The Government is currently looking to access the world markets, especially through the Economic Community of West African States. Being a member of the West African Monetary Union would give Cape Verde access to a market of 300 million consumers, making the country far more attractive to the foreign investors. In 2011 Cape Verde became the first African nation to sign up to the European Union’s GSP+ (Generalised Scheme of Preference), a general preferential market access. The country also enjoys trade preference agreement with the U.S. and is a member of the Community of Portuguese Speaking Countries.

Cape Verde has more people living outside their own country than in it, and their combined remittances amount to more than 9% of GDP. The Government is striving to make greater possibilities available to the people of Cape Verde, in order to reverse the tendency and make the country self-sufficient as soon as possible.