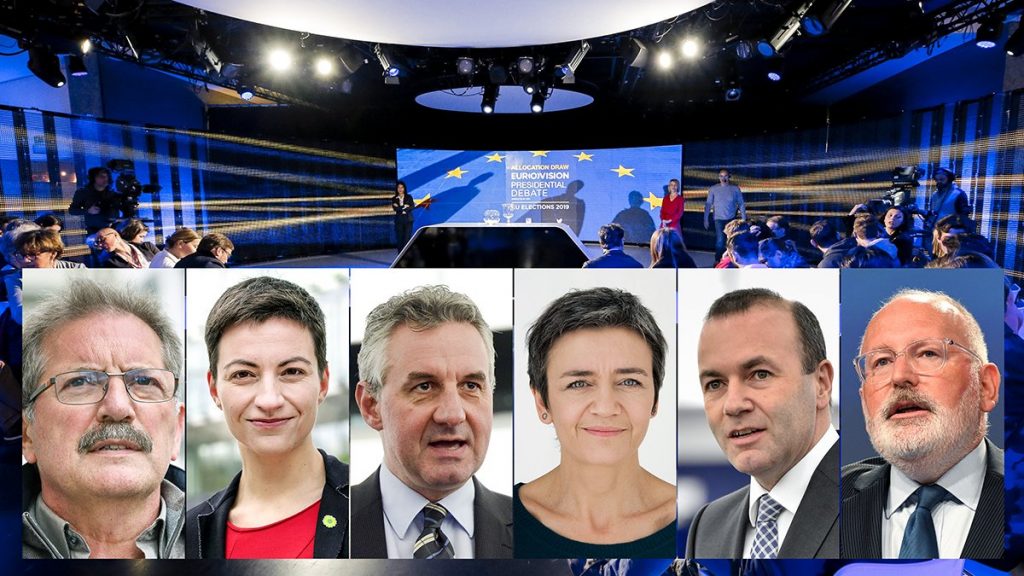 With European elections looming, the lead candidates from six pan-EU party groups have met for a head-to-head debate on a range of issues. Though the field is broad, only two candidates are considered front-runners.

Covering everything from immigration, taxation, climate change, trade and even the future of Europe, six candidates looking to replace Jean-Claude Juncker as the president of the European Commission faced off in Brussels on Wednesday for Europe’s “presidential debate.”

The debate was the only time candidates from the EU’s six largest parliamentary blocs will meet before voters head to the polls between May 23 and 26.

Who are the candidates?

Despite the broad spectrum of candidates taking part in the debate, the conservative Weber and democratic-socialist Timmermans are widely viewed as the two with the best chance of taking over from Juncker as they represent the European Parliament’s largest blocs.

What the candidates said

On climate change: The Greens and Social Democrats both called for a stronger commitment to tackle carbon emissions. “I’m tired of the excuses,” said Timmermans, calling for a tax on aviation and a carbon dioxide tax for all companies.

Keller said she wanted “another Europe” that “protects our planet,” adding that Europeans urgently needed to act together for change.

However, the conservative Weber said care should be taken to preserve jobs, and pressed for a greater reliance on new technologies. “I believe in innovation,” he said.

On taxation of companies: Timmermans said tech giants like Amazon should be challenged over relatively low tax rates that they pay. “We should ask Alexa: When will Amazon pay taxes?” he quipped.

Weber also called for tougher action against the firms. The fact that the EU had taken action over Apple’s low taxation rates in Ireland had made him “proud as a European.”

On Europe: Weber urged optimism about Europe in the debate. After the election, Weber said he wanted an EU Commission “of a new beginning, a new era” that would bring Europe closer to its citizens.

Timmermans spoke out about the process of Britain’s exit from the EU, claiming that the divisiveness it had created had turned Britain into something resembling “Game of Thrones on steroids,” referring to the fantasy series about dynasties hungrily competing for power.

Zahradil called for much less European oversight. Europe, he said, was “no state” and must be “scaled back” and decentralized. He called for “a new balance between the national level and the European level.”

On democracy: Timmermans urged people not to waste their vote. “There is one thing I want to ask you: Whatever you choose, never become indifferent. Choose. Let your voice be heard. If you don’t vote, somebody else will take your voice,” he said.

His message was shared by liberal counterpart Vestager as they ended the debate. “Voting is power. Go vote in this election and inspire people around you to go vote. Otherwise other people will use it,” she said.