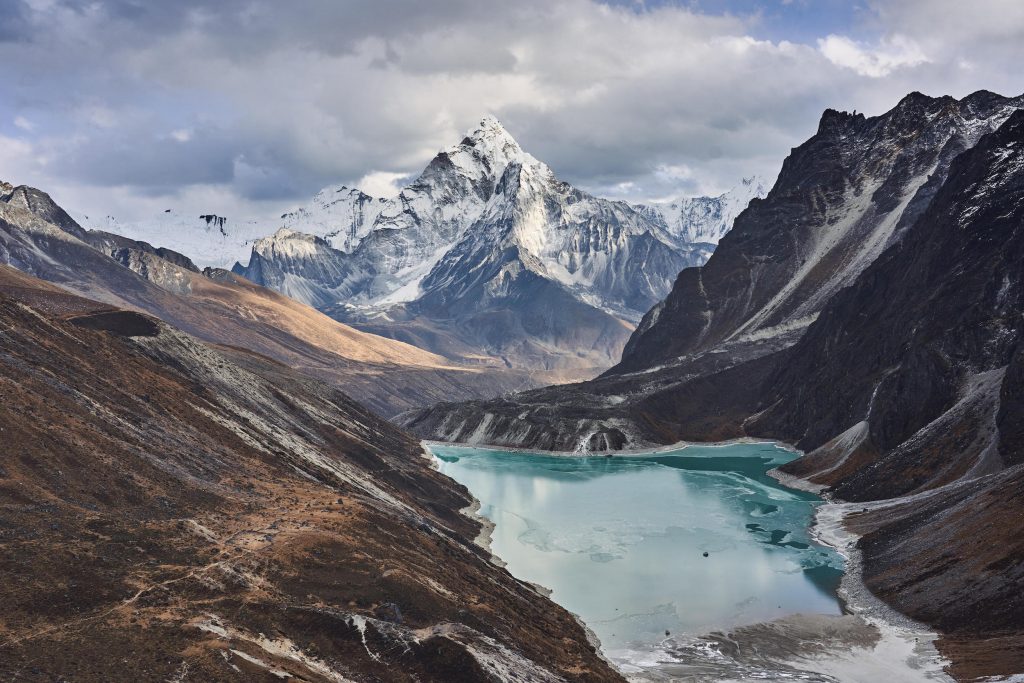 Twitter Facebook Linkedin Google Mail Print
Billions of people around the world depend on the waters locked away in glaciers for their livelihoods, power and food. But climate change is melting them away. What might we lose if they disappear?

Glistening rivers of ice that wind their way down mountainsides, scraping and gouging the rock beneath them, there is little doubt that glaciers are aesthetically beautiful. But they also play a critical role in all our lives. They are integral to industry, livelihoods, nature and climate on every continent on Earth. And they are essential for supporting life in some of the most densely populated and quickly expanding regions.

Acting like giant reservoirs, glaciers lock up water that falls as snow in high altitudes in wet seasons before releasing it as meltwater in dry seasons. In doing so, glaciers ensure that the rivers in their basins have a steady supply of water all year round.

Humans rely upon the water glaciers provide for hydropower, irrigation, livestock, manufacturing and transport. The fact that some of the largest glacier-fed basins flow into some of the fastest-growing nations in the world only adds to their importance.

But glaciers’ finely balanced equilibrium has been off-kilter for a while. They are disappearing, and the rate at which they are doing so is increasing in most cases. This will squeeze the economies downstream who depend on their output. Understanding how quickly the world is losing its glaciers could help protect those people who depend on them – and we can work out just how much that is worth.

Using data on precipitation, the thickness of glaciers, snow cover, and the demands of agriculture, industry, populations and nature, Arthur Lutz, a physical geographer at Utrecht University in the Netherlands, and his co-authors created a glacier vulnerability index for 78 “water towers”. (These water towers might contain several glaciers, mountain ranges and rivers, but are broadly considered as a group and named after one river.) In doing so, the researchers were able to show the importance of each water tower to its region and, using predictions about populations and industry in the future, how vulnerable they were to change.

“For example, the Indus and Ganges, and in Central Asia Amu Darya and Syr Darya – they score really high,” says Lutz. “That’s because they have just huge amounts of water stored as glaciers and also a lot of snow cover. Their demands downstream are very large and very dependent on the mountain water.”

The GDP produced in the Ganges-Bramaputra and Indus basins that depended on glacial meltwater in 2000 stood at around $418bn (£302bn) and $296bn (£214bn) respectively – the fourth and eighth highest of the 78 glacier-fed river systems studied. But by 2050, when Pakistan, India and Bangladesh’s populations are expected to expand significantly and the economies of those countries accelerate as a result, the GDP created in those basins will rise to $4,947bn (£3,575bn) and $2,574bn (£1,860bn), a 11.8- and 8.7-fold increase, putting them first and third on Lutz and his colleagues’ list.

What the glacier vulnerability index demonstrates is the importance of understanding how quickly we are losing these resources. Glaciers are widely regarded as good indicators of the changes happening to our planet. Some glaciers respond quickly to changes in precipitation and temperature, while those in the dry valleys of the Antarctic and high Arctic have slow response times. “Glaciers in high throughput areas – where there is a lot of snow, a lot of melting – have a short response time,” says Bethan Davies, a glaciologist at Royal Holloway University of London.

Glaciers are always moving – edging down their valleys a few centimetres or even several metres at a time – but their overall size depends how much snow is lost through melting and gained through fresh snow falling on top. When snowfall equals the amount of meltwater lost over a year, a glacier is in equilibrium – being replenished from the top and losing water at the bottom, it doesn’t change in size. But any decrease in the amount of snowfall or rise in temperature can quickly result in an increase in melting and a glacier recedes up its valley.

But their immense size means glaciers can usually even out the anomalies of one hot summer or wet winter. Instead, the ebb and flow of glaciers can give a clear picture of climate change over long periods. What we are seeing is a coherent recession, says Davies, overwhelmingly driven by humanmade climate change

Between 2000 and 2019, glaciers globally lost 267 gigatonnes of water each year, and that figure is accelerating faster than the loss of the Greenland or Antarctic ice sheets taken separately. The Antarctic ice sheets cover 8.3% and the Greenland ice sheets 1.2% of the Earth’s land, compared with 0.5% of land covered by glaciers. They might only represent a small part of the Earth’s ice cover, but they are disappearing fast.

What do we stand to lose if glaciers continue to recede at this rate?

Climate scientist Tamsin Edwards from King’s College London and her colleagues have modelled the effects of glacial melting on sea level rise. Limiting warming to 1.5C by 2100 will result in 13cm (5.1 inches) of sea level rise in total, compared to 25cm (9.8 inches) if the planet continues to heat at the current rate and 42cm (16.5 inches) under the most pessimistic scenarios (glaciers will contribute half of this increase).

It might sound like a small amount, but it can have a great impact because the elevation of the ocean is not equal. There are regions where the oceans will get much higher, and regions where it will rise less. In warmer regions, for example, sea levels will be boosted by thermal expansion – as water warms it expands, and over scales as large as oceans, it makes a big difference.

Glaciers are not just useful as stores of freshwater, they also contribute to rare ecosystems.

A glacier itself might look devoid of life, but on and under the surface you can find unique organisms. While the low atmospheric pressure and high ultraviolet radiation make glaciers an inhospitable environment, on the surface specialist glacial algae can grow. The surface of a glacier can also be dimpled or perforated with holes that contain life. These holes, called cryconite holes, form as dust and dirt of the top of the glacier heats up in the sun and melts its way through the surface.

Cyroconite holes become little ecosystems, slightly sheltered and warmer than the surrounding ice, with a little meltwater and some nutrients from the dirt – they support fungi, bacteria, tardigrades and crustaceans.

Deeper under the ice, where sunlight cannot penetrate, living organisms must rely on energy from the underlying bedrock. In individual subglacial lakes, thousands of unique microbes have been found, though we have no idea what is the complete extent of biodiversity living in these inaccessible places.

As glaciers retreat, however, biodiversity is predicted to increase, as mountain habitats become suitable to a broader range of organisms as they warm. Though this comes at the cost of losing glacier specialists in favour of generalist organisms able to colonise quickly from downstream. To lose our glaciers might mean we lose access to thousands of unique species able to thrive in challenging climates.

Beyond the edge of the ice, glaciers are essential to sustaining biodiverse environments. “There are some regions where glacier melt is crucial,” says Inés Dussaillant, a glaciologist from the World Glacier Monitoring Service at the University of Zurich. North of the Andes, in Chile, Ecuador, Bolivia, Argentina and Peru, there are high-altitude wetlands that rely on glacial meltwater, for example. These wetlands, called bofedales, range from 3,000-6,000m (9,800-19,700ft) above sea level, and are “very ecologically diverse and socially important,” says Davies.

Since pre-Hispanic times, people in the High Andes have used bofedales as a source of water to irrigate crops and rear livestock. The wetlands are also an important carbon sink as the soil is rich in peat. To date most of this carbon-rich soil remains intact as peat extraction is not yet widespread.

“But the glaciers that supply them are very small, and we have passed peak water, so the water is declining,” says Davies. “Peak water” describes the moment when glacial melt and mass are still high, before the glaciers are too small to contribute significantly. “Rainfall here is very seasonal, so they are very reliant on glacial meltwater.” In arid, high-altitude environments like the Andes, the only way to sustain these wetlands is with glacial runoff.

In one projection, we reached peak water in 45% of mountain glaciers in 2017
“Where there is no precipitation in the summer, the rivers rely mostly on glacier melt,” says Dussaillant. “In parts of the Himalayas and northern Andes, in the driest months the water contribution from glaciers will be 70-80%. If in the future these regions have no glaciers there will be almost no water in the rivers.” That could be a disaster for the 129 million farmers downstream of the Himalayas that depend on this water to irrigate their land.

Before the rivers dry up, they might actually increase in size as a result of melting glaciers.

Some glaciers, like those in parts of the Andes, have already passed peak water, says Dussaillant, but for others this moment will come later this century at current estimates.

That might mean productivity from the rivers in their basins increases before it decreases, perhaps painting a misleading picture about the health of the rivers.

In western Canada, central Europe and South America, where glaciers tend to be smaller, peak water has passed or is expected to occur in a few years, according to the same projection. Europe is also reliant on glacier water, but might need to account for losing some of that power. The waters in the Danube and Rhine basins contributed the first- and second-most GDP in 2000, according to Lutz’s research, thanks to the agricultural, manufacturing, hydropower and tourism industries that rely on them.

In the basins fed by the glaciers of High Mountain Asia, runoff will rise until about the middle of the century. But the glaciers in this region vary considerably. The glaciers that feed into the Indus will reach peak water later than elsewhere, around 2070, whereas those that feed into the Brahmaputra basin in eastern India and Bangladesh have already passed peak water. The large variability in this region is in part due to changes in rainfall.

“They are giving us a signal that changes are coming,” says Dussaillant, of the early warning from smaller glaciers. “Unless the Earth starts getting cooler, those glaciers will be lost.”

But both Dussaillant and Davies stress that it is still possible to avoid the worst of the damage. Meeting the Paris Agreement set by the IPCC of limiting global warming to 1.5C would be “the difference between losing all ice or keeping most ice”, says Davies. “Below 1.5C you avoid these planetary tipping points. I don’t think it is too late.”