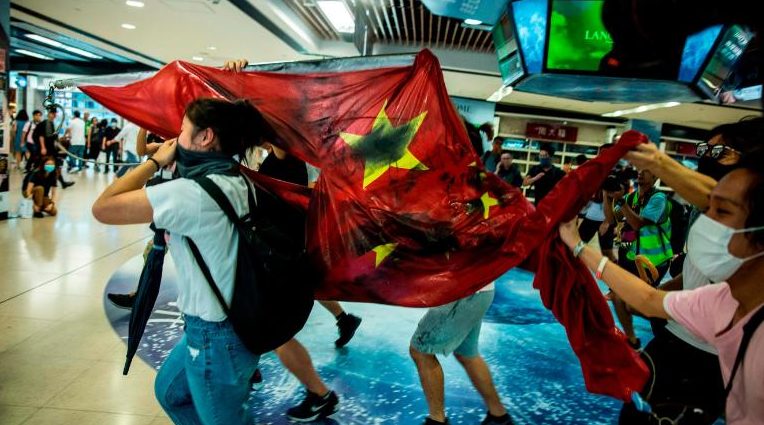 Twitter Facebook Linkedin Google Mail Print
There were more scenes of violence and destruction across Hong Kong over the weekend as protesters targeted subway stations and shopping malls in an apparent escalation as the city enters its sixteenth consecutive week of unrest.

Police and protesters clashed in multiple districts, with the latter throwing petrol bombs and setting fires as the authorities responded with tear gas and rubber bullets. Protesters largely avoided pitched battles with the authorities, however, retreating and moving around the city quickly.

Inside New Town Plaza, a shopping mall in the northern Hong Kong town on Sha Tin, protesters targeted Chinese-owned businesses and those owned by the food and beverage conglomerate Maxim’s, including Starbucks and Simply Life. Earlier this month, Annie Wu Suk-ching, daughter of Maxim’s founder James Tak Wu, infuriated protesters when she publicly criticized them and defended police handling of the unrest.

While the mall protests were initially light-hearted, including a conga line, they soon became more serious, with stores graffitied and regular business disrupted, forcing many to close. Trash cans in the mall were overturned, water sprayed over the floor from a hose, and television screens smashed, according to the South China Morning Post. A connecting subway station was also heavily vandalized, forcing it to be closed. Outside New Town Plaza, protesters set fire to barricades and threw a Chinese flag into a nearby river.

There were similar scenes of chaos in malls in three other districts, and multiple other subway stations closed after being targeted by protesters.

In a sign of how the protests are growing more violent and out of control, there were also several attacks on apparent bystanders during demonstrations Sunday, and protesters were recorded beating a riot officer with his own weapon and attempting to grab his sidearm.

One of the ugliest scenes came in Yuen Long, where protesters staged a sit in to mark two months since an attack at a subway station in the northern town by alleged triad groups. Two men who had shouted at protesters and appeared to threaten them with a bottle were beaten by a crowd, hit with bamboo sticks, poles and a metal chair, leaving them bloodied and dazed.

Elsewhere in Yuen Long, protesters threw petrol bombs at police and set fire to barricades, as well as vandalizing the subway station. In a statement, police said they severely condemned “rioters for repeatedly throwing petrol bombs at police vehicles and police officers and attempting to snatch the revolver.”

Speaking at a background briefing for foreign media on Friday, a senior police commander said the force was concerned that the level of violence was reaching a point where officers might be forced to use live ammunition to defend themselves or others.

“Our officers are worried that the level of violence has got to such a level that they might have to kill someone or be killed themselves,” the commander said. “We have been so restrained but in the face of such violence this pressure has become extremely dangerous.”

On multiple occasions in previous weeks, police officers have pulled sidearms or fired their weapons in the air during confrontations with protesters, in circumstances they said were life threatening.

Bonnie Leung – convener of the Civil Human Rights Front, a major protest organizer – said any police use of live ammunition would be “unnecessary and unjustified.” Leung added that officers are able to protect themselves in “many different ways.”

Police are facing a major test next week when China marks the 70th anniversary of the founding of the People’s Republic on October 1. Pressure will be on the Hong Kong authorities to ensure that the city’s unrest does not overshadow celebrations in Beijing, where a large military parade will be overseen by President Xi Jinping to mark national day. Past national days have been a key date for peaceful protest in Hong Kong, but it seems unlikely Tuesday’s event will pass without incident, as recent unrest continues to grow more chaotic even as overall crowd size shrinks.

Beyond October 1, attention will turn to local government elections in November. Pro-democracy parties in the city are hoping the unrest can see them take overall control of multiple district councils, but radical protesters may resent any attempt to pivot the opposition movement to an election footing.

Peaceful and moderate groups have been increasingly marginalized in recent weeks, and limited attempts to reign in the violence unsuccessful. While it appears that there is still a deal of support for the movement — sparked months ago by a now withdrawn extradition bill with China but expanded to include longstanding demands for greater democracy — it is unclear how long ordinary Hong Kongers will tolerate the disruption, particularly as it is increasingly spreading to civilian rather than government targets.