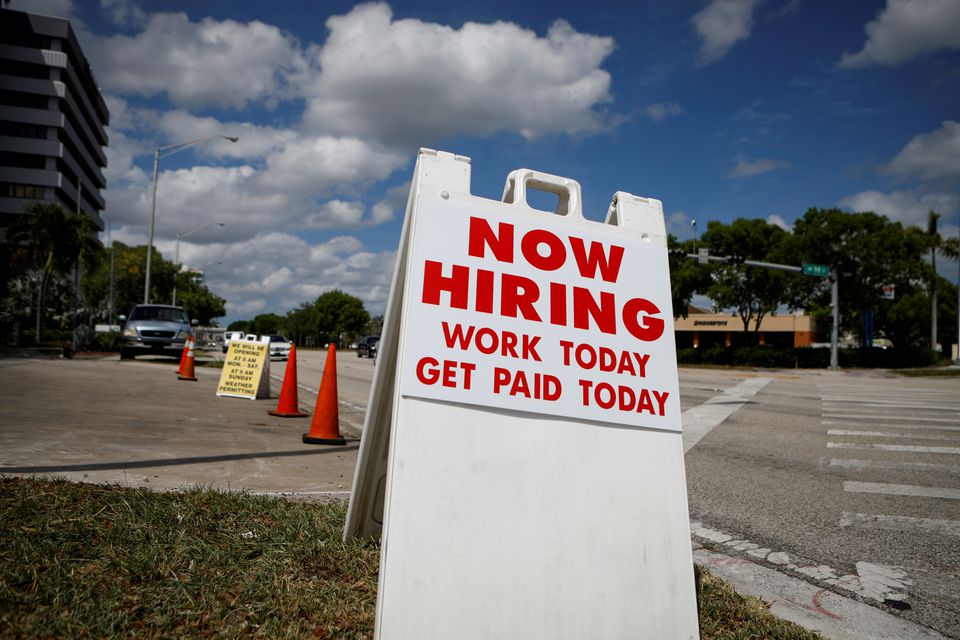 Twitter Facebook Linkedin Google Mail Print
U.S. employers hired the most workers in nearly a year in July and continued to raise wages, giving the economy a powerful boost as it started the second half of what many economists believe will be the best year for growth in almost four decades.

The Labor Department’s closely watched employment report on Friday also showed the unemployment rate dropped to a 16-month low of 5.4% and more people waded back into the labor force. The report followed on the heels of news last week that the economy fully recovered in the second quarter the sharp loss in output suffered during the very brief pandemic recession.

“We are charting new economic expansion territory in the third quarter,” said Brian Bethune, professor of practice at Boston College in Boston. “The overall momentum of the recovery continues to build.”

Nonfarm payrolls increased by 943,000 jobs last month, the largest gain since August 2020, the survey of establishments showed. Data for May and June were revised to show 119,000 more jobs created than previously reported. Economists polled by Reuters had forecast payrolls would increase by 870,000 jobs.

The economy has created 4.3 million jobs this year, leaving employment 5.7 million jobs below its peak in February 2020.

Hiring is being fueled by pent-up demand for workers in the labor-intensive services sector. Nearly $6 trillion in pandemic relief money from the government and COVID-19 vaccinations are driving domestic demand.

But a resurgence in infections, driven by the Delta variant of the coronavirus, could discourage some unemployed people from returning to the labor force.

July’s employment report could bring the Federal Reserve a step closer to announcing plans to start scaling back its monthly bond-buying program. The U.S. central bank last year slashed its benchmark overnight interest rate to near zero and is pumping money into the economy through the bond purchases.

“This is the last employment report Chair (Jerome) Powell sees before Jackson Hole, and we have to imagine that he lays the groundwork for a potential September tapering announcement,” said Conrad DeQuadros, senior economic advisor at Brean Capital in New York. “We think the odds continue to rise that tapering begins before the end of 2021.”

Employment in the leisure and hospitality sector increased by 380,000 jobs, accounting for 40% of the job gains, with payrolls at restaurants and bars advancing by 253,000.

Government payrolls increased by a whopping 240,000 jobs as employment in local government education rose by 221,000. Education jobs were flattered by a seasonal quirk.

Hiring was also strong in the professional and business services, transportation and warehousing, and healthcare industries. Manufacturing payrolls increased by 27,000 jobs, while construction employment rebounded by 11,000 jobs. Retail trade and utilities were the only sectors to shed jobs.

The jobless rate, however, continued to be understated by people misclassifying themselves as being “employed but absent from work.” Without this misclassification, the unemployment rate would have been 5.7% in July.

About 261,000 people entered the labor force, lifting the participation rate to 61.7% from 61.6% in June. The employment-to-population ratio, viewed as a measure of an economy’s ability to create employment, rose to 58.4% from 58% in June.

Even more encouraging, the number of long-term unemployed dropped to 3.4 million from 4 million in the prior month. They accounted for 39.3% of the 8.7 million officially unemployed people, down from 42.1% in June. The duration of unemployment fell to 15.2 weeks from 19.8 weeks in June.

Faced with a record 9.2 million job openings, employers continued to raise wages to attract workers. Average hourly earnings increased 0.4% last month, with sharp gains in the hospitality industry. That followed a similar rise in June and lifted the year-on-year increase in wages to 4.0% from 3.7%.

Half of the nation’s states led by Republican governors have ended these federal benefits before their Sept. 6 expiration. Economists are cautiously optimistic that the worker shortage will ease in the fall when schools reopen for in-person learning and sustain the strong pace of hiring.

“August should be another big month, and September as well, as there are still millions who need to find work quickly,” said Chris Low, chief economist at FHN Financial in New York.