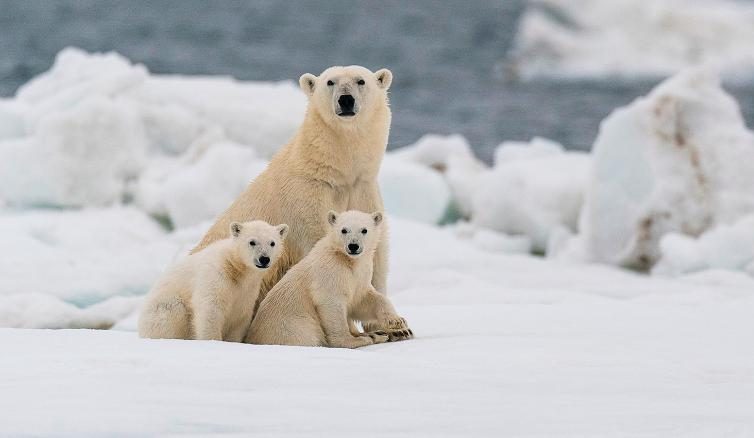 Twitter Facebook Linkedin Google Mail Print
For many people, there is one animal that comes to mind when they think of creatures threatened by climate change: the polar bear.

In recent years, images of emaciated bears searching desperately for food have made the Arctic’s apex predator the poster child for the effects of global warming.

Now, as the planet continues to warm rapidly, a new study brings another dire warning: If humans fail to reduce greenhouse gas emissions, most populations of the iconic species could struggle to survive beyond 2100.

Already, some populations have likely crossed key thresholds that will make their survival difficult, and perhaps impossible, according to the findings of the study published Monday in the journal Nature Climate Change.

However, there is a glimmer of hope that some bears can be saved.

Though the number of polar bears is likely to be greatly reduced in some regions, moderate cuts to heat-trapping gas emissions in the coming decades could allow them to persist in a few pockets of the Arctic.

As the Arctic’s sea ice goes, so go the polar bears

Polar bears are the largest terrestrial carnivores on Earth, but their fate is intimately tied to what happens to the Arctic’s sea ice.
They rely on the ice as a platform to catch seals – their prey of choice – because they are not skilled enough swimmers to catch them in the open water, says Péter K. Molnár, an assistant professor at the University of Toronto Scarborough and one of the authors of the study.
The life of a polar bear has always been characterized by periods of feast and famine. In winter, when the sea ice is at its greatest extent, the bears try to gorge themselves on seals to build up energy stores to survive the lean summer months, when the ice melts and they are forced onto land.
A polar bear cub is shown in Svalbard, Norway. A new study finds that polar bears in most regions of the Arctic could struggle to survive beyond 2100 if humans do not reduce greenhouse gas emissions.
But as the region’s sea ice declines as it has in recent decades, bear populations in some parts of the Arctic are being forced to go longer and longer without food.
“Ultimately, the bears need food and in order to have food, they need ice,” said Molnár. “But in order for them to have ice, we need to control climate change.”
Figuring out how long bears in different regions can fast before reproduction and adult survival are impaired was the researchers’ first challenge.
The study found that the length of time a bear can survive without food varies by region and the condition of the bear, but that cubs are the first to be impacted by a lengthy fast.
Adult females with cubs are generally the second-most vulnerable, followed by adult males and finally, solitary females, some of which can fast for a staggering 255 days before their chances of survival decline steeply, the researchers estimate.
Next, the researchers looked at projections for Arctic sea ice under two different climate change scenarios to see how long the bears could be forced to go without food in the future.
The Arctic’s sea ice has shrunk dramatically in recent decades, particularly during summer. The last 13 years from 2007 to 2019 have been the lowest 13 years for summer sea ice in the satellite record, which dates back to 1979, according to Walt Meier, a senior research scientist at the National Snow and Ice Data Center.
Since the mid-1990s, the Arctic has experienced levels of warming that are more than double the global average. Exceptionally high air temperatures are behind the Arctic’s declining sea ice and are being driven mainly by people burning fossil fuels, Meier says.
Looking into the future, other studies have found that the Arctic could be ice-free in summer as soon as 2040 or 2050.
“The question is not ‘if’ we’ll see an ice-free summer in the Arctic – it’s ‘when,'” Meier said.

‘They are not completely doomed if we change our behavior’

By combining their estimates for how long polar bears can fast with Arctic sea ice projections, the researchers were able to estimate for the first time when polar bears in 13 different regions could face trouble in the future.
Some populations, like those in Canada’s Hudson Bay, may have already crossed thresholds that will impact reproduction and survival.
And the future will likely look far worse for the bears without efforts to curb global warming.
Under a “business as usual’ climate scenario, where humans fail to reduce greenhouse gas emissions, nearly all polar bears in the Arctic – outside of perhaps a few groups in Canada’s remote Queen Elizabeth Islands – may struggle to survive by 2100, the study found.
However, if humans are able to muster moderate cuts to global emissions, the chances that bears in other regions will persist beyond the end of this century increase.
The authors say that ultimately, these findings show that the fate of polar bears lies in our hands. “I’m well aware that the story we’re telling is a grim one,” Molnár said. “But there is also an element of hope that they are not completely doomed if we change our behavior.”