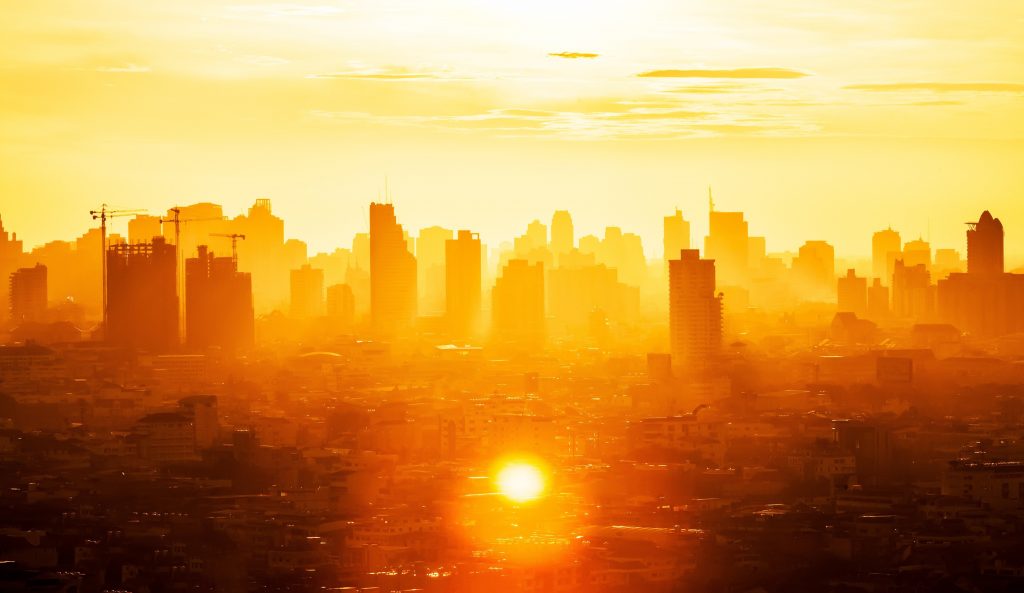 Twitter Facebook Linkedin Google Mail Print
Record-breaking heatwaves have dominated the news recently, affecting large parts of North America, Eastern Europe and even the Arctic, and bringing with them headlines of infrastructure collapse, suffering and death more commonly associated with major natural disasters such as floods or wildfires.

In Portland, America, where residents used to a more temperate climate do not have air conditioning in their homes as standard, cooling centres were opened to provide brief respite. And in Islamabad, Pakistan, 20 children in one class fell unconscious – with some suffering nose bleeds – amid sweltering 40C heat, according to local reports.

The EU’s Earth observation programme confirmed that June was the hottest on record for North America, and the second hottest for Europe.

Could these extreme heatwaves, until now overlooked as a major cause of fatality, become a regular annual event as the world warms? Here’s what we know.

Heat domes and Rossby waves: why records are being broken

Cities in northern America have been breaching temperature records repeatedly in recent days. Residents in Lytton, Canada, were ordered to evacuate last week over wildfire risks after the village recorded the country’s highest ever temperature of 49.6C.

Parts of Asia and the Middle East have sweltered in temperatures above 50C at various points throughout June. The United Arab Emirates reached a new all-time high of 51.8°C, while Pakistan’s heat and humidity has risen beyond a threshold at which humans can survive.

Meanwhile, parts of Eastern Europe and Russia have also seen their own new high-temperature records, including in Finland, where the capital hit a record June high of 31.7C.

The heatwaves are caused by known patterns of high pressure – and low pressure in other places – known as the Rossby waves. Currently in a formation known as the Silk Road teleconnections stretching around the globe, the jet stream waves cause high pressure to pinch off and sit over certain regions, trapping hot air in a ‘heat dome’ effect.

It’s that weather pattern that is also partly causing grey weather over the UK right now, along with the tail effects of La Nina, which has a cooling effect on the Pacific.

Why climate change is to blame for record temperatures

The world is now 1.2C hotter on average across the globe than it was before the Industrial Revolution. That average translates to temperature rises of 5 to 10 degrees in some places.

That means when regular patterns of heat come along, such as the Rossby waves, they push the temperatures up to new extremes.

“Global warming is essentially the steroids that make what would have been a pretty big heatwave into a truly exceptional heatwave,” climate scientist Zeke Hausfather told NBC.

In the US, heatwaves are happening three times more often than they did in the 1960s, about six per year compared with two per year.

Another likely factor at play is melting Arctic sea ice, says David King, a former chief scientific adviser to the British Government, which influences the dynamics of the planetary waves that are causing high pressure points, and may make them more frequent.

Heatwaves are an invisible killer

Heatwaves tend to exacerbate existing health problems, particularly those that are cardiovascular or respiratory, so impact vulnerable and elderly populations disproportionately.

That also makes them harder to directly attribute to the heatwave, compared with other natural disasters such as flooding or hurricanes.

Studies looking at Europe’s 2003 heatwave suggest it was responsible for the premature death of more than 70,000 people.

British Columbia, in Canada, reported a 195 per cent increase in sudden deaths during its heatwave. The province’s chief coroner, Lisa Lapointe, said many of the victims had been found alone in flats with poor ventilation.

“This, frankly, took many of us off guard,” she told local media. “I think it’s very likely many of us misunderstood the extreme risk.”

Recently, Pakistan’s mixture of heat and humidity made it one of only two places on earth to have officially passed, albeit briefly, a threshold hotter than the human body can withstand.

Jacobabad, in Pakistan, became one of the two hottest places on earth last month. “The Indus Valley is arguably close to being the number one spot worldwide,” says Tom Matthews, a lecturer in climate science at Loughborough University. “When you look at some of the things to worry about, from water security to extreme heat, it’s really the epicentre.”

Mr Matthews and colleagues last year analysed global weather station data and found that Jacobabad and Ras al Khaimah, north east of Dubai in the United Arab Emirates, have both temporarily crossed the deadly threshold. The milestone had been surpassed decades ahead of predictions from climate change models.

The researchers examined what are called wet bulb temperatures. These are taken from a thermometer covered in a water-soaked cloth so they take into account both heat and humidity.

Wet bulb thermometer readings are significantly lower than the more familiar dry bulb readings, which do not take humidity into account. Researchers say that at a wet bulb reading of 35C, the body can no longer cool itself by sweating and such a temperature can be fatal in a few hours, even to the fittest people.

“It approximates how warm it feels to humans because we cool via sweating,” Mr Matthews says. “We rely on that exclusively. When you use that measure, the wet bulb temperature, the two regions that stand out on earth are the shores of the Gulf and the Indus Valley in Pakistan. They are truly exceptional.”

Jacobabad crossed the 35C wet bulb threshold in July 1987, then again in June 2005, June 2010 and July 2012. Each time the boundary may have been breached for only a few hours, but a three-day average maximum temperature has been recorded hovering around 34C in June 2010, June 2001 and July 2012. The dry bulb temperature is often over 50C in the summer.

“Heatwaves kill more people than flooding annually. But while there is a lot of policy around flooding, heatwaves do not get the same attention,” said Ms Brimicombe.

That means communities are left vulnerable to the effects, with much of the world’s infrastructure ill-suited to temperatures we are now seeing.

In downtown Portland, Oregon, where temperatures reached 46.6 C, the city’s streetcar service was forced to temporarily suspend services after the power cables supporting it melted in some areas. Roadways melted and the use of electric fans strained the national grid.

The UK’s heatwave plan has been criticised as “demonstrably inadequate” by experts, with little done to address poorly ventilated housing, identifying those most vulnerable and setting up appropriate warning systems.

How to beat the heat

There are measures that can be taken to mitigate the impact of heat on the human body. Staying indoors with air conditioning on is probably the most effective, but not possible for everyone thanks to the cost and availability of electricity. In Iraq, regular power cuts have left those who are unable to afford backup generators to suffer without fans, fridges or air conditioning.

In the Pacific Northwest, where extreme high temperatures are more unusual and air conditioning is not the norm, cooling centres have been opening up to allow people to seek brief respite.

Simpler methods such as putting your feet in cold water and making sure you stay hydrated can be effective. In Pakistan, people have taken to buying blocks of ice from street vendors to cool down.

Ultimately, many people may be forced to leave. A study last year suggested climate change could push 1.5 billion people to migrate to escape unlivable heat in the next 50 years.