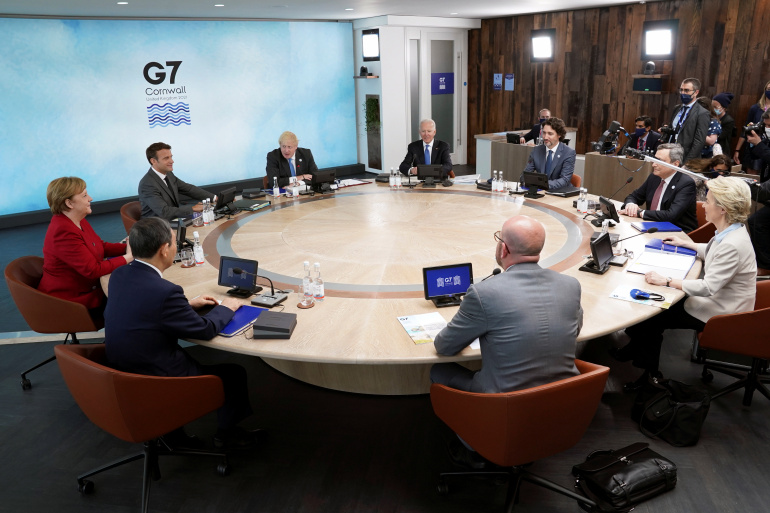 The club of leading economies – Canada, France, Germany, Italy, Japan, the United Kingdom and the United States – say a joint approach is the world’s best chance for recovering from the global health crisis and tackling climate change.

As the summit, British Prime Minister Boris Johnson told leaders the gathering was a chance to learn lessons from the coronavirus pandemic and ensure they do not repeat any errors.

“We need to make sure that we now allow our economies to recover,” he said, adding that a more equitable future for the world was essential.

“We need to make sure that when we recover, we level up and we build back better. We have a huge opportunity to do that as G7,” he added.

But regarding the plan to donate vaccines, campaigners said the pledge – which includes 500 million US doses and 100 million from the UK – does not go far enough.

“If the best G7 leaders can manage is to donate one billion vaccine doses then this summit will have been a failure,” Oxfam’s health policy manager Anna Marriott said, insisting the world needs 11 billion doses instead as she called for a global waiver on patent protections for vaccines.

“Charity is not going to fix the colossal vaccine supply crisis,” she said. “The G7 should break the pharmaceutical monopolies and insist that the vaccine science and know-how is shared with qualified manufacturers around the world.

“Presidents Biden and Macron have supported a waiver on the intellectual property behind COVID vaccines – the other G7 nations should follow their lead. The lives of millions of people in developing countries should never be dependent on the goodwill of rich nations and profit-hungry pharmaceutical corporations.”

Alex Harris, director of government relations at Wellcome, a London-based science and health charitable foundation, said: “The new US and UK commitments are a step in the right direction, but they don’t go far enough, fast enough.

“What the world needs is vaccines now, not later this year. At this historic moment, the G7 must show the political leadership our crisis demands … We urge G7 leaders to raise their ambition.”

President Joe Biden is setting the tone, ditching Donald Trump’s isolationist stance on global affairs, to ram home a message of resolve by the G7 and NATO against both Beijing and Moscow as he heads on to his first sit-down meeting with Russian President Vladimir Putin next week in Geneva.

“The driving animating purpose of this G7 summit is to show that democracy can deliver against the biggest challenges we’re facing in the world,” a senior US administration official said.

The G7 leaders are also expected to outline more help for developing nations to build up infrastructure, as a counterpoint to the debt-fuelled spending by China in Africa, Asia and Latin America.

The initiative “will embrace a high standards, transparent, climate-friendly, non-corrupt mechanism” for infrastructure investment in the developing world, the US official said.

“It will be an alternative to that which other countries, including China, are offering.”

Johnson dislikes the decades-old phrase “special relationship”, arguing it makes Britain look subservient to Washington, telling the BBC instead that it should be viewed as “indestructible”.

He also played down any differences with Biden over Northern Ireland, ahead of showdown talks between the prime minister and EU chiefs on Saturday to tackle deep fissures opened up by Brexit.

Raab told Sky News that “change must come from the European Commission side” and that “we are not negotiating or haggling the integrity of the United Kingdom”.

Global biodiversity was another G7 theme this weekend, with the leaders set on an agreement to protect at least 30 percent of the world’s land and oceans by 2030.

They will also debate aiding poorer nations to transition out of fossil fuels, in the buildup to the UN’s COP26 summit in November in Scotland.