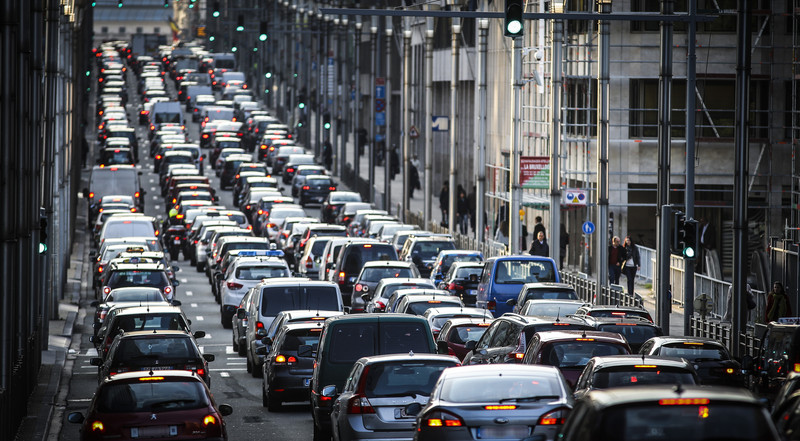 Twitter Facebook Linkedin Google Mail Print
The European Commission unveiled on 14 July a proposal that would effectively ban the sale of petrol and diesel vehicles in the EU from 2035, as part of its massive set of revised climate and energy legislation – the so-called ‘Fit-for-55’ package.

And from 2035, new rules will make selling new fossil fuel-powered vehicles impossible in the EU. The Netherlands and Denmark are expected to introduce such a ban earlier, in 2030.

Although urgent action is needed across all sectors of the EU economy to reduce emissions, this is particularly important in the transport sector – where emissions continue to increase.

Transport accounts for about a quarter of the total greenhouse-gas emissions in the EU – with road transport as the biggest contributor, and one of the main sources of air pollution in cities.

Green groups welcomed the proposal as a “turning point” for the auto industry, but many are asking for interim targets to ensure carmakers ramp up production of emissions-free vehicles sooner.

“The new EU rules will democratise electric cars and give a major boost to charging, meaning clean cars will soon be affordable and easy-to-charge for millions of Europeans,” said William Todts, executive director of NGO Transport & Environment.

By contrast, industry players have slammed the commission proposal for being “pure electric” and “a one-way street”.

“The point is to avoid burning fossil fuels in the future and to promote the use of renewable fuels. This requires a future-oriented technology mix and not a commitment to a single technology that is supposedly the only solution,” said Ralf Diemer, managing director of the eFuels Alliance, representing over 100 companies in the sector.

Electric-vehicle uptake is closely linked to the deployment of adequate charging infrastructure.

Under the Green Deal, the EU set a target to have one million charging points for electric vehicles by 2025, and three million by 2030, rising to 16.3 million by 2050.

However, EU auditors recently warned that the EU is not on track to achieve the one-million target, since about 150,000 new points would be needed each year – or some 3,000 per week.

“The transition to electric vehicles is going much faster than anybody had ever anticipated, but…the charging infrastructure should be there,” admitted the EU commissioner for the Green Deal, Frans Timmermans.

Under the new proposal, member states will have to expand charging capacity in line with zero-emission car sales, installing charging points every 60km and hydrogen-fuelling points every 150km on major highways.

Aiming to harmonise payment methods across the 27 EU countries, the EU executive has proposed that operators of recharging points have to accept electronic payments from 2027.

Prices need to be “clearly comparable, transparent and non-discriminatory” – displaying if the price is per session, minute or kWh, the proposal reads.

Additionally, the EU wants to change the tax system to ensure that most-polluting fuels are taxed the highest. Currently, a lower minimum rate applies to diesel than petrol – despite being more polluting.

As the EU is expecting millions of electric cars over the next decade, recycling lithium batteries might become a key challenge, since its production requires extracting rare-earth metals and is energy-intensive.

It is estimated that over a fifth of the lithium and 65 percent of the cobalt needed to make a new battery could come from recycling in 2035.

To reduce emissions from carbon-intensive aviation, new legislation would require all aircraft leaving from EU airports to use fuel containing at least 0.7 percent of sustainable fuels by 2030, raising to five percent by 2035.

The commission also wants to tax kerosene for flights within the EU from 2023 – this fuel has benefited from a tax-exemption until now.

Unlike aviation, Brussels has proposed extending the emission trading system to cover maritime shipping to reduce emissions, covering all intra-EU journeys and 50 percent of those going outside the bloc from European ports from 2023.

The various proposals will need the agreement of the 27 EU countries plus the European Parliament.