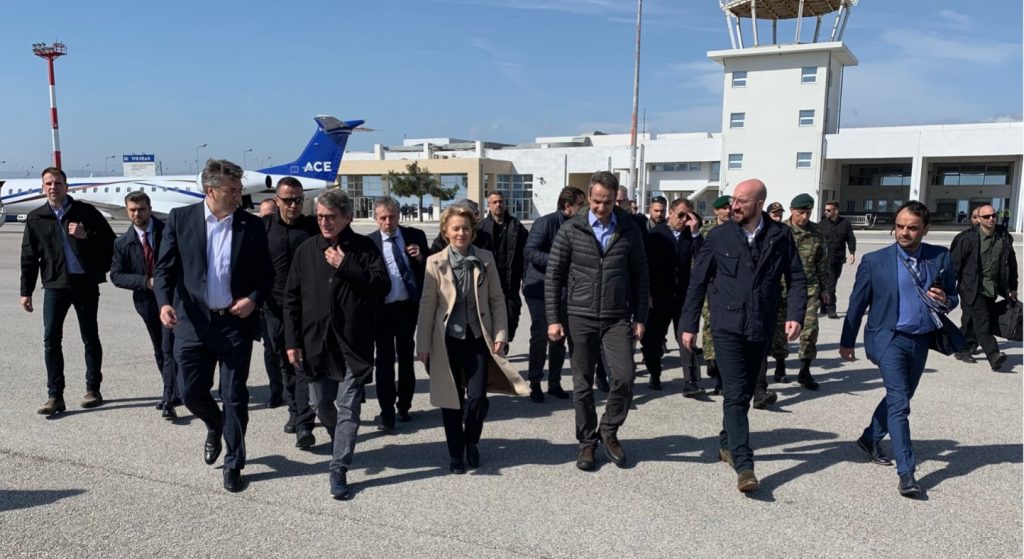 European Union officials visited Greece to see for themselves the migrant tensions building on its frontier with Turkey and pledged millions of euros in aid while calling for order after sporadic violence over the weekend.

“Greek authorities are facing a very difficult task in containing the situation,” European Commission President Ursula von der Leyen told reporters during a press conference near the Kastanies crossing on Tuesday. “This border is not only a Greek border, but it is also a European border and I stand here today as a European at your side.”

She said Greece would be able to access as much as 700 million euros ($780 million) to help manage the situation and that Frontex, the EU border protection force, was preparing to deploy a “Rapid Intervention Team,” comprising ships, helicopters and guards. Earlier, Greek Prime Minister Kyriakos Mitsotakis took the EU delegation on a helicopter ride to survey the border.

The sight of desperate people gathered at the frontier sent a shudder through the EU leadership, stirring memories of the migration crisis of 2015 that fueled support for right-wing populists across the continent.

This time around though, the reality is very different, at least so far. Some people were bused down, others paid for their own journeys, and most of them aren’t Syrians at all, but nationals of several countries who’ve been struggling to carve out new lives in Turkey.

All have found Greek officials barring their path onward into the EU. About 26,500 people have been stopped from entering, according to the Greek authorities. Some are now stuck in the no man’s land between the two borders. Others returned to the Turkish cities they came from once they realized the Greek side was sealed. About 200 people have been arrested by the Greek police.

EU officials have widely interpreted Erdogan’s move as a play to get support for his campaign in Idlib, the northern Syrian province where Turkish troops and rebel forces are fighting the army of President Bashar al-Assad. Assad has the backing of Russia and Iran and last week handed Turkey its heaviest military losses in decades. On Wednesday, the Turkish Defense Ministry said two more troops had been killed in Syria.

“This rush is not an accident, it’s organized,” Austrian Chancellor Sebastian Kurz told journalists in Vienna, also Tuesday. “Those people are being used by Erdogan as a political football, as a weapon, to apply pressure on the European Union.”

For Chancellor Angela Merkel, the recollections of 2015 are particularly sensitive. She’s still dealing with the political consequences of her decision to open Germany’s borders to 1 million refugees and has pledged to step down when her term ends next year.

On Tuesday, one of her domestic critics, Interior Minister Horst Seehofer, vowed that Germany will help Greece to defend the EU’s external borders and criticized von der Leyen for being hesitant in her dealings with Turkey. Merkel, for her part, criticized Erdogan on Monday for playing politics “on the backs of refugees.” She insisted there’s no comparison with 2015.

All the same, there’s growing concern about how a new crisis could affect the political mood in Germany — her Bavarian sister party, Seehofer’s CSU, is especially worried that voters might turn to the right-wing AfD in communal elections on March 15.

European interior minister meeting in Brussels on Wednesday will pledge “all necessary measures” to prevent illegal border crossings into Greece and call on Turkey to honor its commitments to control irregular migration under its 2016 accord with the EU, according to a draft of their conclusions seen by Bloomberg.

The EU’s goal is “to go back to the normality we had seen before last Friday,” Peter Stano, European Commission spokesman, told reporters in Brussels on Tuesday.

EU foreign affairs ministers will hold an emergency meeting on Friday to decide on the next steps.

There have been reports of violence on the border, and the first confirmed death came on Monday when the Greek Coast Guard said a child drowned when a dinghy capsized between the island of Lesbos and the Turkish coast.

Tensions between Greece and Turkey meanwhile have skyrocketed, with the two historical rivals exchanging barbs over human rights and border security.

More than 3.6 million Syrian refugees have fled to Turkey since the Syrian civil war began nine years ago. Another 100,000 of those who managed to reach Greece during the previous crisis are still surviving in camps on its islands. Both countries want more European support.

The gamechanger though could be Idlib, the only major population center where the Turkish-backed rebels are still holding out against Assad. If it falls, the number of refugees heading north could rise exponentially, triggering a full-blown crisis.

The UN’s refugee agency said that move has no legal basis but the EU officials in Greece on Tuesday refused to be drawn into criticizing their hosts.

“Those who seek to test Europe’s unity will be disappointed. We will hold the line and our unity will prevail,” von der Leyen said. “Now is the time for concerted action and cool heads and acting based on our values. Turkey is not an enemy and people are not just a means to reach a goal. We would all do well to remember both in the days to come.”