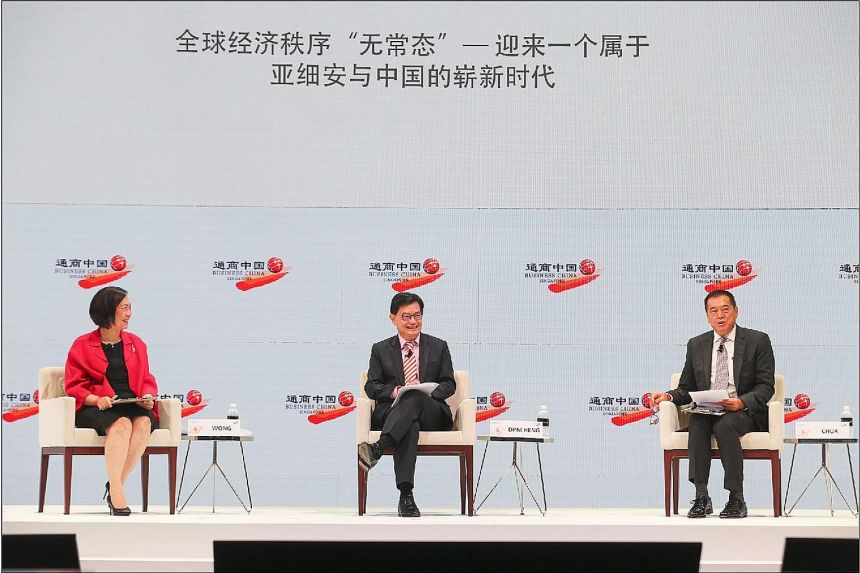 Twitter Facebook Linkedin Google Mail Print
Asean and China can benefit from exploring new “building blocks” of growth in areas such as digitalisation and sustainability, in addition to deepening cooperation in existing areas such as trade, said Deputy Prime Minister of Singapore Heng Swee Keat.

With sound economic fundamentals and a combined population of two billion people, there is large potential for catch-up growth, he said.

But even as it ramps up collaboration with China, Asean must stay united and keep engaging all major partners, Mr Heng said.

This is especially the case when South-east Asian countries get caught up in the intensifying strategic competition between the United States and China.

Mr Heng was speaking on the first day of the two-day FutureChina Global Forum at the Sands Expo and Convention Centre at Marina Bay Sands.

The annual forum brings together government and business leaders to discuss a range of China-related issues.

This year’s theme of economic cooperation in the “never normal” is apt, given the uncertainty and swift changes – such as digitalisation and climate change – taking place in the world, Mr Heng said.

“We cannot predict the future, but we can, and must, seek to create a better future,” he added.

One part of this effort will be fortifying the foundations of existing partnerships. This can be done by strengthening the rules-based multilateral framework for trade and investments, he said.

He pointed to the Asean-China free trade deal as a cornerstone of such collaboration, calling on countries to work towards upgrading this agreement by reducing non-tariff measures and addressing new priorities.

In addition, countries should maintain the momentum for global trade liberalisation and build confidence in multilateralism, he said.

Beyond trade deals, countries can work together on new “building blocks” such as digitalisation. For instance, Singapore already has a Smart City Initiative with Shenzhen and has signed digital economy agreements with Australia, Chile and New Zealand, he said.

Another building block will be increased cooperation on sustainable development, including catalysing a green recovery from the crisis resulting from the pandemic. Countries can also look to exploring carbon sequestration – the long-term capture of carbon dioxide from the atmosphere.

South-east Asia, with more than one-third of the world’s mangroves and up to 120 million ha of land for reforestation, has significant potential to contribute in this area, Mr Heng said.

Turning his attention to the broader strategic context in which Asean-China economic ties are set, he noted that frictions are often exacerbated by disparities in size.

Still, even when there are disputes, relations between all countries must be conducted within the framework of international law, he said.

An open, transparent, inclusive and rules-based approach will benefit all countries, not just China and those in South-east Asia, but also the US and other trading partners, Mr Heng stressed, observing that the biggest challenge facing the region is strategic competition between the US and China.

While relations between the two great powers have become less volatile under the new Biden administration in the US, underlying tensions remain and are unlikely to abate in the foreseeable future.

Even so, it is in the interest of both the US and China to cooperate on common challenges, Mr Heng said. These include tackling the Covid-19 pandemic, coordinating global economic recovery and addressing climate change.

“For Asean, we do not expect to change the course of the strategic competition, but we must do all that we can to keep the region open and inclusive,” Mr Heng said.

“It is not a question of choosing sides, but of retaining our ability to make choices for ourselves, to advance our collective interest and do what is best for our peoples.”