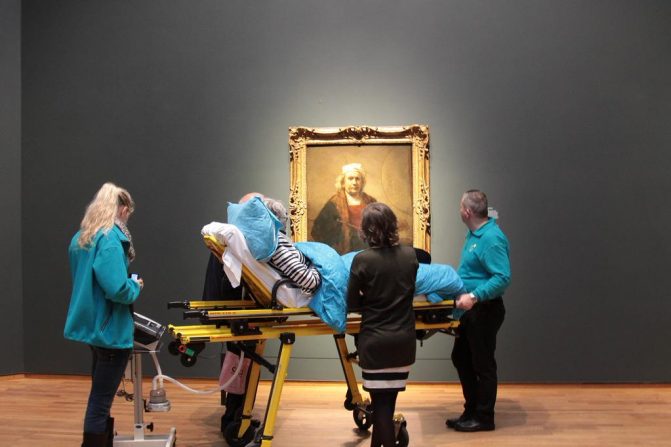 Only a couple of weeks into its run, ‘All the Rembrandts’ at Amsterdam’s Rijksmuseum has attracted a number of guests, but some of those guests are extraordinary. Through an incredible Dutch organization, terminally ill people have requested to visit the museum at a higher rate to see the exhibition as their dying wish.

Founded in 2006, Stichting Ambulance Wens, or Ambulance Wish Foundation (AWF), began after founder and ambulance driver Kees Veldboer was charged with transporting a terminally ill man between hospitals. When there was a delay on the receiving hospital’s part, Veldboer asked the man, Mario Stefanutto, if there was anywhere he’d like to go in the meantime. Stefanutto simply wanted to see the Rotterdam Harbour once more and Veldboer made it happen. He even worked with a number of people to set up a day for Stefanutto to set sail once more despite being stretcher bound. From there, Veldboer and with his wife Ineke, who is a nurse, began the foundation determined to make the final wishes of those nearing the end of their life come true, no matter how big or small. Now, the organization has hundreds of volunteers, a fleet of ambulances to transport those they work with, and have helped thousands accomplish their final wants in the time that matters most.

The Rijksmuseum isn’t a new request among the people who AWF, either. In 2015, a photograph taken by Roel Foppen, a driver for the AWF, made headlines. Its subject was unusual for a museum scene as a woman on a bright yellow stretcher, surrounded by four people including nurse and transport team, gaze at Rembrandt’s Self-portrait with two circles (c.1665-1669). She and a number of other individuals were able to visit the museum’s ‘Late Rembrandt’ exhibition with the help of AWF. It was one of more than 50 trips that have been organized by AWF to bring people to the museum in order for them to see some of their favourite artworks once more.

‘All the Rembrandts,’ though, is a once in a lifetime experience during which, the Rijksmuseum will have all 400 of its works (a couple dozen paintings and a large quantity of drawings and prints) by the artist on display. The AWF most often receives requests to visit someone’s home, see the sea, or even visit the zoo. However, the exhibition, running through June 10th and commemorating the 350th anniversary of the Dutch Master’s death, has created an influx of requests to the AWF to visit the museum. The exhibition offers a unique experience for those wanting to see artworks by the artist and it creates a beautiful scene for someone nearing the end of their life to celebrate and honour the death of one of the West’s great painters.