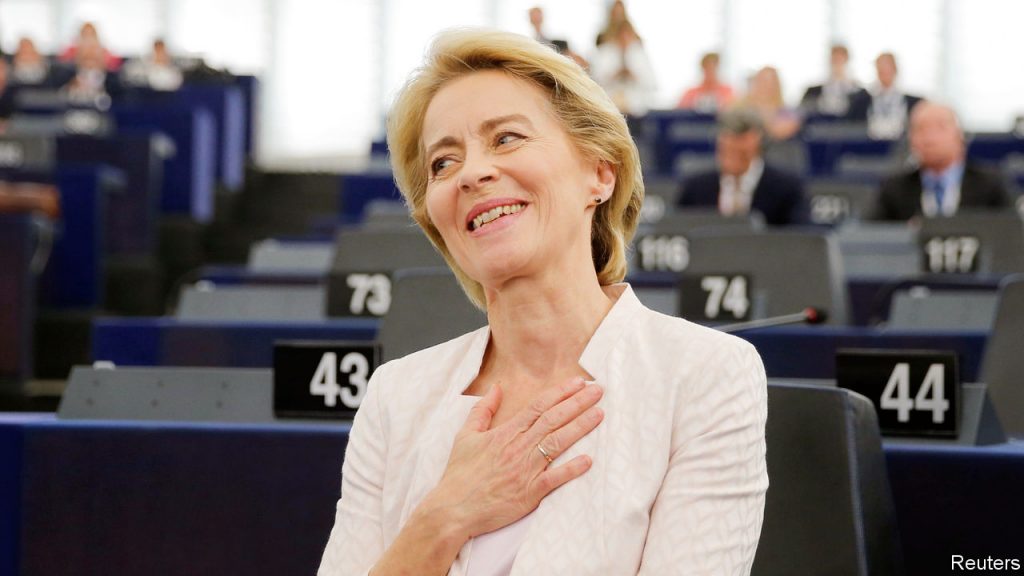 German Defense Minister Ursula von der Leyen had faced an uphill battle as a compromise candidate. She won by a slim majority, with 383 out of 747 votes.

German Defense Minister Ursula von der Leyen has won the vote to become the next president of the European Commission, and will be the first woman to hold the post.

She received 383 out of 747 possible votes, just nine more than the minimum for her election. A total of 327 lawmakers voted against her and 22 abstained.

In brief remarks after the final tally was announced, she said her aim was for a strong and united Europe.

Speaking to DW, von der Leyen said her top priorities would be climate neutrality by 2050 and digitization. “Those are the two biggest concerns or opportunities we have to tackle,” she said.

German Chancellor Angela Merkel congratulated von der Leyen, calling her a “committed European” who would “tackle with great vigor the challenges facing us as the European Union.”

“Though I am losing a long-standing minister, I am winning a new partner in Brussels,” Merkel said, via her spokesman Steffen Seibert on Twitter.

Charles Michel, Belgium’s caretaker prime minister and the future president of the European Council also took to Twitter to offer his support, saying he was “looking forward to cooperate closely with the institutions for the future of Europe.”

“Let’s work together in the interest of all Europeans!”

Von der Leyen had spent most of Tuesday trying to woo MEPs who had expressed skepticism about her policies, in particular the Green bloc that saw its numbers swell during the EU elections in May. She promised to put forward legislation within her first 100 days in office that would make Europe the “first climate neutral continent in the world by 2050.”

She had faced something of an uphill battle in the European Parliament, having been put forward as a compromise candidate after lackluster election results for the traditionally powerful center-right and center-left made it difficult to gain enough support for either of the candidates they had put forward before the May vote.

Von der Leyen will step down as defense minister on Wednesday and will succeed Jean-Claude Juncker at the helm of the commission on November 1. She will be the first German to lead the EU executive branch since the creation of the modern European Union. German diplomat Walter Hallstein was president of its previous iteration, the Commission of the European Economic Community, from 1958 to 1967.

Juncker also joined in the congratulations for his successor.

“Finally the first woman is at the helm of the EU Commission,” he tweeted. “This job is a huge responsibility and a challenge. I am sure you will make a great president. Welcome home!”