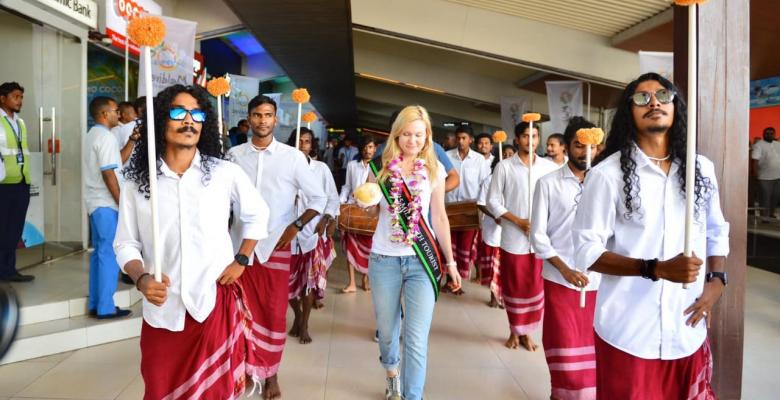 Twitter Facebook Linkedin Google Mail Print
The Maldives welcomed its 1.5 millionth tourist of 2019 at Velana International Airport on 24th November 2019. This impressive milestone means that the Indian Ocean destination has now already surpassed the total number of visitor arrivals in 2018, when a total of 1.48 million international tourists visited.

The 1.5 millionth tourist, Mrs. Marina Kazakova from Russia, arrived in the Maldives on Aeroflot flight SU320 from Moscow. Mrs. Kazakova was met by officials from Maldives Marketing and Public Relations Corporation (MMPRC), as well as the Ministry of Tourism, Maldives Airports Company Limited (MACL), Maldives Association of Tourism Industry (MATI), Maldives Immigration and representatives of the Maldives tourism industry.

After having her passport stamped at Maldives Immigration, Mrs. Marina Kazakova and her husband were escorted with traditional bodu beru performers to the airport’s VIP lounge area. They were then welcomed by the honourable Ali Waheed, Minister of Tourism; Mr. Thoyyib Mohamed, Managing Director of MMPRC; Mr. Moosa Solih, Acting Managing Director of MACL; and Chief Guest Mr. Ahmed Nazeer, Secretary General of MATI. The VIP lounge area was decorated for the ceremony, in which the couple was awarded with a congratulatory certificate and special gifts representing traditional Maldivian culture and tourism.

This is the couple’s seventh visit to the Maldives and to celebrate her arrival, Mrs. Marina Kazakova and her husband were awarded with a complimentary holiday package for six nights at Mirihi Island Resort, with return tickets provided by MMPRC.

The 1.5 millionth tourist was welcomed to the Maldives an impressive 38 days ahead of the previous estimation for reaching this milestone and is testament to MMPRC’s efforts to promote the Maldives as a leading holiday destination this year. A total of 130 promotional activities were managed by MMPRC this year, including attendance at international trade fairs and the organisation of international trade roadshows, media FAM trips and joint marketing campaigns. In the UK, this included attendance at World Travel Market 2019 and an out-of-home advertising campaign, which showcased the beauty of the Indian Ocean destination via advertising on 40 digital screens at London bus stop, plus on the digital screen situated inside London Waterloo train station and on an Original Tour double decker bus.

Earlier this month MMPRC announced its new tourism strategy for 2020, which will include a stronger focus on promoting the rich culture of the Maldives and attracting niche markets such as MICE, culture and sports tourism.

In terms of visitor arrivals to the Maldives in 2019, the island nation remains one of the UK’s most popular holiday destinations, with a total of 102,286 UK holidaymakers arriving to the Maldives from January – October 2019. This represents an impressive 9.6% year-on-year increase in UK arrivals. The UK holds the fifth market ranking on tourist arrivals by nationality, firmly holding 7.3% of the total market share and steadily increasing year-on-year.

The Maldives is hopeful that the total visitor arrival figure will increase to 2.5 million tourists per year by the end of 2023.