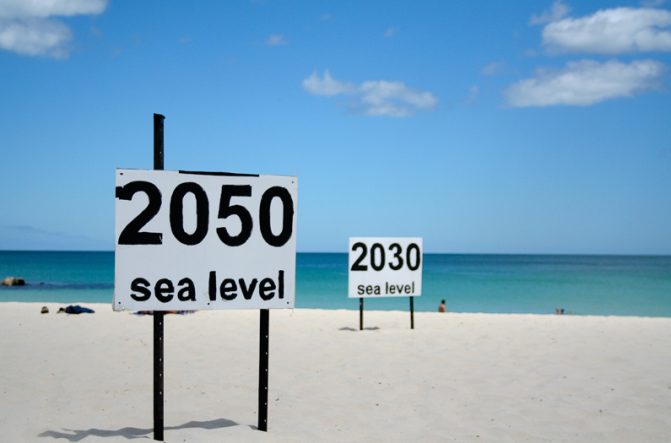 The Republic of the Marshall Islands isn’t going to allow the rising seas to wipe it off the map. Instead, the islands will attempt to rise above. Literally.

President Hilda Heine announced a plan to elevate the country’s islands in an interview with the Marshall Islands Journal Friday, reports RNZ Pacific. Sea level rise and erosion are set to make most island atolls uninhabitable by 2050, and small island nations have become increasingly vocal about this existential threat. They’re also thinking about radical ways to adapt.

“Raising our islands is a daunting task but one that must be done,” Heine told Marshall Islands Journal. “We need the political will, and especially traditional leaders’ commitment, to see this through. That is why a national dialogue is planned to bring all the parties together.”

The Marshall Islands’ 29 atolls, home to 75,000 people, average just 6.5 feet above sea level. The government has been thinking about elevating its islands for a while, and is still trying to figure out exactly how that would work. Last year, a scientist floated the idea of dredging a lagoon to build a higher island, reports National Geographic.

While the idea of raising these islands may sound wild, the country isn’t aren’t the first to suggest the solution. In southern California, city officials with Newport Beach have a plan to raise homes, roads, and a seawall around Balboa Island by 2050 to address the rising sea levels. Miami Beach is also elevating its roads.

Elevating an island, however, is much easier to do for a place like Newport Beach, whose annual operating budget is nearly $300 million. To compare, the Marshall Islands have a gross domestic product of barely $200 million.

Dealing with climate change costs serious cash, and some places are lucky enough to have it. Unfortunately, the places most vulnerable often don’t. And sea level rise is just one piece of that puzzle; extreme weather events and droughts won’t get any better, either.

Marshall Islands President Heine is calling for collaboration across other atoll nations to figure out how they can adapt to climate change, per RNZ Pacific. The Intergovernmental Panel on Climate Change mentions small island nations may return to their traditional knowledge when forming solutions. Historic practices, like elevated settlements, have largely been abandoned due to “globalization, colonialism, and development,” per the 2018 report.

Coming together may help islanders remember their ancient traditions—and help them raise the money and attention they need to clean up this mess. Their culture and land are on the line.