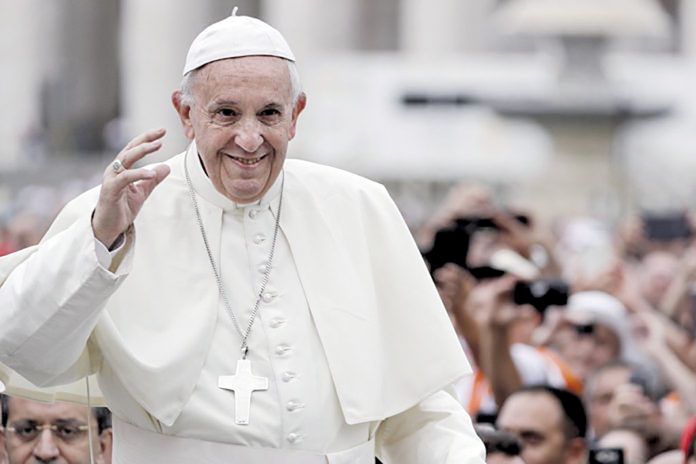 Twitter Facebook Linkedin Google Mail Print
IT might not be the first place you imagine when you think about robots. But in the Renaissance splendour of the Vatican, thousands of miles from Silicon Valley, scientists, ethicists and theologians gather to discuss the future of robotics. The ideas go to the heart of what it means to be human and could define future generations on the planet.
The workshop, Roboethics: Humans, Machines and Health was hosted by The Pontifical Academy for Life.

The academy was created 25 years ago by Pope John Paul II in response to rapid changes in biomedicine.
It studies issues including advances in human genome editing techniques. These techniques were controversially claimed to have been used by Chinese scientist He Jiankui, to alter the genes of twin girls so they could not get HIV.
For the opening of the meeting, Pope Francis presented a letter to the Human Community, where he outlines the paradox of “progress” and cautions against developing technologies without first thinking of the possible costs to society.

In the letter, the Pope emphasises the need to study new technologies: Communication technologies, nanotechnologies, biotechnologies and robotics. “There is a pressing need, then, to understand these epochal changes and new frontiers in order to determine how to place them at the service of the human person, while respecting and promoting the intrinsic dignity of all,” Pope Francis writes.

In stark contrast to this message came a hypothesis from Japanese Professor Hiroshi Ishiguro, who says we will no longer be recognised as flesh and blood humans, in 10,000 years’ time. Famous for creating extremely human-like robots at his lab in Osaka University, including one of himself, Prof Ishiguro spoke about the need to evolve our bodies away from their current materials to something more enduring. “Our ultimate aim of human evolution is immortality by replacing the flesh and bones with inorganic material,” he said.

For Archbishop Vincenzo Paglia, president of the Pontifical Academy for Life, there is a clear answer. “This dream is a terrible dream,” adding that it was “impossible” to divide the body and soul. “The flesh is the body with the soul and the soul is a spirit with flesh,” he asserted. “The body is very important for human beings, through the body we love, through the body we embrace and communicate with one another,” he said. “We are aware on one side this is unbelievable progress, but on the other side, we felt that there are risks that this development can give the world.
“The risk is we forget we are creatures, not creators.”

Creating robots that can do tasks humans can do, even intimate tasks like caring for elderly people or having a relationship, is a fundamental aspect of Prof Ishiguro’s work. “We have a serious problem, the Japanese population is going down to half the number of the current population within 50 years.”

Instead of relying on human immigrants or a baby boom to solve the decline, Prof Ishiguro points to the possibility of utilising robots instead.

“We don’t have enough annual immigration, Japan is an isolated country, it’s an island, our culture is quite different from other countries.

“It is not so easy for the foreigners to survive in Japan in some sense,” Prof Ishiguro said. “That is the main reason why we are so crazy for creating robots.”

The European Group on Ethics in Science and New Technologies (EGE) released a report last year emphasising the “urgent and complex moral questions” raised by advances in AI and robotics.

It emphasised a need to for a collective and collaborative way of working to establish a set of values around which to organise society and the role these new technologies play.

“It was on the request of the European Commission to have ethical thoughts about the future of our societies and the future of work in times of robotics and artificial intelligence,” said Professor Christiane Woopen, chair of the EGE and professor of ethics and theory of medicine at Cologne University, who was at the Vatican.

The focus of the group’s work is on how human rights relate to robots, rather than the idea of giving rights to new forms of autonomous technology.

“We are not of the opinion that AI or robots should have rights on their own,” Prof Woopen said. “Rights pertain to people and refer to fundamental rights, like human dignity, the right to autonomy.” “Those rights refer to people, to human beings, and they refer to the EU Charter on fundamental rights,” she explained.

But Prof Ishiguro thinks the closer we get to having robots in our house and in our friendship circles, the more rights we will naturally want to give them. “Once a robot is going to be a partner, or a companion for us, a friend for us, we will want to protect the robot of course,” he said. “As we give a kind of right to the animals, I think we will give a kind of right to the robots as well.”

For Prof Woopen, blurring the lines between humans and robots and entering into relationships with them raises complex ethical issues. “If you imagine that someday there will be a robot that completely behaves like a human being, moves like a human being, has facial expressions like a human being, how will you then decide whether this entity has a soul or not? We use them for our purposes, because we are the beings who can set their goals, who can choose the means, who can do good and evil, but we are free human beings,” she says. “And I think that we shouldn’t grant technical artefacts the freedom we have.”

“We have underlined the importance of technical research, this is a really good gift that God gave to us,” Archbishop Paglia says. “But when we become similar to computers, we immediately see conflicts, dangers, inequalities and sometimes a terrible slavery with the other.” he says.

Prof Woopen emphasised the need for governments to address these emerging ethical issues. ‘We have to be faster in Europe,” she said. “But I think governments have already learned that these are crucial aspects to regulate and deal with because this will just shape our societies without taking account of what governments say, if they don’t.”