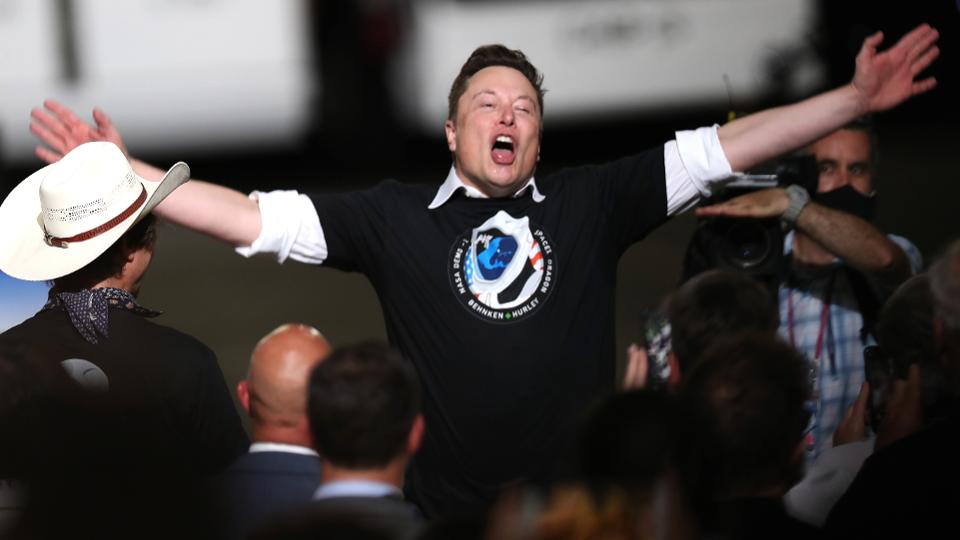 Twitter Facebook Linkedin Google Mail Print
Elon Musk’s meteoric rise up the Forbes Billionaire List has continued this month, as he’s ascended past luminaries such as Warren Buffett and Steve Ballmer. As of Monday afternoon, Musk’s net worth surpassed $74 billion, meaning he is now the fifth-richest person on the planet.

Musk, 49, is the CEO of SpaceX and Tesla, the electric vehicle company whose stock price has soared since March.

Tesla is now not only the world’s most valuable car company, with a market cap of $304.5 billion, it’s worth more than Ford, Ferrari, General Motors and BMW combined.

Musk was ranked No. 31 on Forbes’ Billionaires List as recently as mid-March, with a net worth just under $25 billion.

His fortune has nearly tripled since then, skyrocketing to $74.2 billion at the close of trading Monday, Forbes calculates.

Musk owns 21% of Tesla but has pledged more than half his stake as collateral for loans; Forbes has discounted his stake to take the loans into account.

Musk first debuted on Forbes’ 400 Wealthiest Americans List in 2012 in 190th place with a net worth of $2.4 billion. On January 1 this year, he was the 37th richest person on earth. However, Tesla’s sudden and spectacular rise has propelled him near the very top of the world’s wealthiest humans. Tesla’s surge has confounded some investors, considering it’s far smaller than its competitors and only recently began to log quarterly profits. Tesla produced 103,000 vehicles in the first quarter; Toyota produced 2.4 million vehicles during that same period. In 2019, American automakers General Motors and Ford generated ten times more sales than Tesla. Late last month, analysts from Morgan Stanley warned that Tesla stock, which was trading at roughly $1,000 per share at that time, was “grossly overvalued and set to plunge.” Earlier this month, Musk said that Tesla would produce virtually fully autonomous self-driving vehicles by the end of 2020, a claim that was met with skepticism by an auto industry accustomed to a heaping of hype from Musk on the capabilities of self-driving technology. Musk has not sold shares of Tesla since 2010.

“I really couldn’t care less,” Musk emailed Forbes about his net worth earlier this month. “These numbers rise and fall, but what really matters is making great products that people love.”

“Moves like we are seeing in Microsoft and Tesla and Amazon are truly insane and unlike any i have ever seen in my life,” tweeted analyst Jim Cramer on Monday afternoon. When asked if Tesla was a ‘Covid Stock,’ Cramer replied, “i don’t even know if it is a stock. it is something else entirely, like a new species discovered in the wild.”