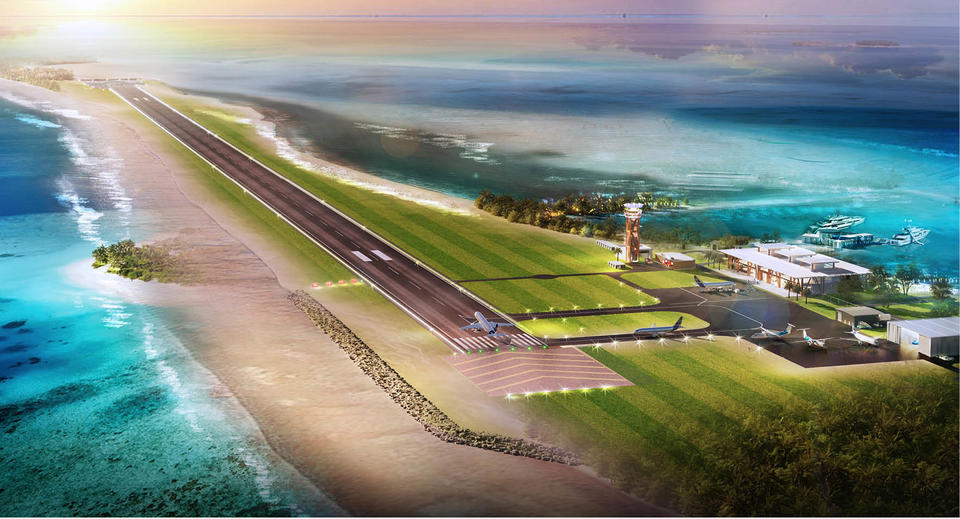 The number of tourist coming to the Maldives is increasing at an unprecedented rate, and the Maldives Government has inaugurated several projects aimed at improving the tourism infrastructure. Among them is the Maafaru International Airport, aimed at serving the northern and eastern regions of the archipelago. The airport has received substantial support from the Abu Dhabi Fund for Development (ADFD), part of UAE’s pledge to assist the economic development of the Maldives.

Abu Dhabi Fund for Development, ADFD, the leading national entity for economic development aid, has commended the opening of a major infrastructure project – Maafaru International Airport, located on one of the islands of the Noonu Atoll in the Maldives.

To support the strategic objectives of the Government of the Maldives, ADFD contributed Dh191 million ($52 million) towards the project.

Serving the northern and eastern regions of the archipelago, the airport was officially inaugurated by the Government of the Maldives. Bolstering sustainable socioeconomic development in the island country, the airport aims to accommodate the surging numbers of tourists arriving from various parts of the world, and drive the growth of the transportation and tourism sectors. In addition, the new airport is set to stimulate logistical and economic activities, and provide new job opportunities for the local population.

Speaking on the occasion, Mohammad Saif Al Suwaidi, Director General of ADFD, said, “ADFD views the transportation sector as a high priority due to its economic importance and its impact on other sectors, such as tourism, agriculture, and manufacturing. In line with its goal of supporting growth in developing countries, the Fund has contributed to around 97 strategic transportation projects valued at Dh14 billion in 44 countries around the world to date.”

Highlighting the Fund’s efforts in the Maldives, he added, “Complying with the directives of the wise UAE leadership, ADFD contributed to the financing of the Maafaru International Airport project that reflects its keenness to advance continued, comprehensive, and sustainable economic development. Our nine key ventures in the island country fall within the framework of priorities outlined by the Government of the Maldives and support international efforts to achieve the UN’s Sustainable Development Goals.”

For his part, Mohammad Aslam, Minister of National Planning and Infrastructure of the Maldives, said that the Government of the UAE and ADFD have played an important role in driving sustainable development in the Maldives. He pointed out that the Fund has contributed to the financing of several strategic projects in the country that have improved economic conditions and the standard of living.

Aslam added that the ADFD-funded Maafaru International Airport caters to the steady growth of inbound tourism and enhances other key sectors, including transportation.

ADFD’s scope of the project comprised the construction of a runway approximately 2,200 metres long, hangars, and service roads to accommodate Airbus A320-200 and Boeing 737 aircraft.

Works also included the construction of the airport’s main and office buildings, a firefighting station, a control tower, and a desalination plant. A marina for boats that serve neighbouring islands, the installation of a generator, and the provision of maintenance equipment are some of the other important achievements. In addition, the funding supported infrastructure works and the establishment of power, communication, and water networks.

ADFD has enjoyed strong relations with the Government of the Maldives since 1976. The Fund has financed nine development projects in the country valued at approximately Dh565 million, spanning crucial socioeconomic sectors, such as housing, communications, transport, energy, and education.