As the number of Irish tech ‘unicorns’ (start-up companies with a value of over €1 billion) now stands at seven, the country is punching above its weight on the global stage. According to figures from the Irish Venture Capital Association, the amount invested into start-ups is soaring with the overall volume of deals increasing by 20% from 233 in 2020 to 279 in 2021.

Last year, Ireland was once again the fastest growing economy in the EU and is consolidating its standing as the destination of choice for well-established multinationals and steadily emerging as a vibrant ecosystem for aspiring entrepreneurs.

This year, a World Economic Forum survey crowned Dublin 17th in the world for talent concentration, well ahead of magnets like New York or Hong Kong, largely due to the presence of global tech giants such as Google, Facebook, LinkedIn, Twitter, and Amazon. 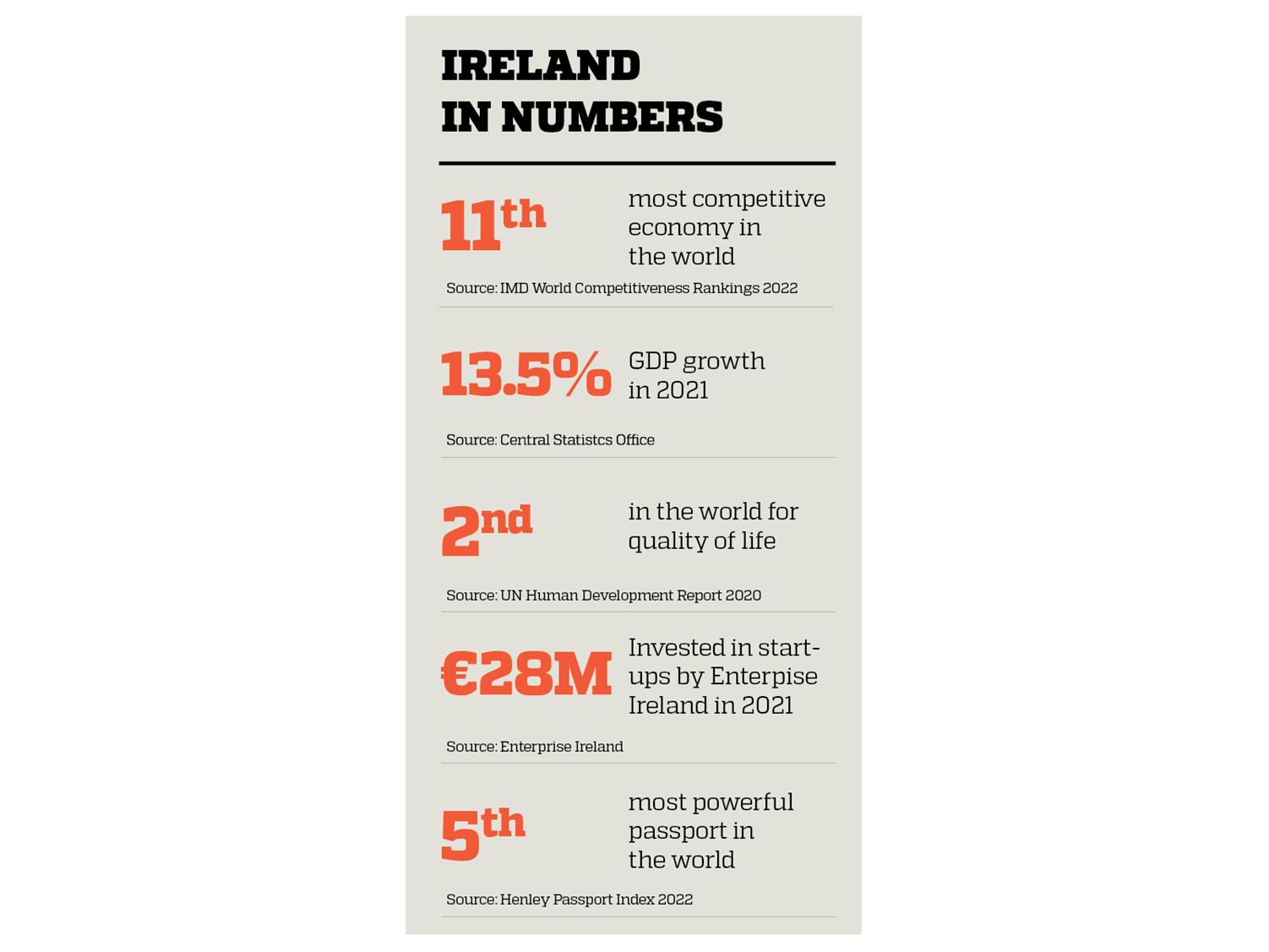 Stripe, an online payments processing giant and Silicon Valley’s single most valuable private company at €95 billion, was founded in 2010 by two young and smart brothers from rural Ireland – John and Patrick Collison. “Everybody is looking to what Stripe has achieved” she says, “and whether you’re starting in Galway, Cork, or Dublin, you can have global ambitions and bring that drive to improve the world.”

“There is a realization that something special is happening and for the next half century Irish tech start-ups are going to be a major engine of this economy, but with global intent,” she adds.

Promising new ventures are blossoming. In Dublin, a business-to-customer drone delivery company Manna is making lightning-fast suburban deliveries affordable, green and safe. In Cork, the software company Teamwork serves clients such as Disney and Netflix and has just secured a new €70 million investment. Another noteworthy start-up, Equal1 Laboratories, has developed a technology that will produce cost effective quantum computers within three years, in collaboration with University College Dublin.

“We have the skill set, staff and ambition – and a real signposting of this is that in 2022, two Irish start-ups have already gained tech unicorn status,” says Fitzgerald. “We now have seven and counting – with many ‘soonicorns’ coming down the road.”

The Irish government offers a range of tailored support mechanisms for enterprises of all sizes, including access to finance, management development, mentoring, business development programs, market access, and trade promotion.

Through 170 different government agencies, programs and tools, Irish enterprises and start-ups receive strong support both for domestic and international growth.

With a proven track record of attracting and nurturing businesses with global ambitions, Ireland retains its appeal for world-class companies from high-value sectors.