Since the days when 16th-Century traders used their hub in Macau to make fortunes shipping silk and spices from the Orient, the Portuguese have referred to lucrative business transactions as a “negócio da China” – a Chinese deal.

In recent years, the phase has gained added meaning after a spate of mega-deals by Chinese investors in Portugal. The Chinese have snapped up bargains in a sell-off of state-owned businesses undertaken by the Portuguese government in response to the euro-zone economic crisis.

The deals have brought advantages to all sides. The Portuguese government earns much-needed cash; Portuguese companies get partners with access to markets in Asia and beyond; the Chinese gain a gateway to the European Union, Brazil and fast-growing markets in Portuguese-speaking Africa.

Chinese have snapped up bargains in the sale of state-owned businesses undertaken by the Portuguese.

“Portugal wants to position itself as the first choice for Chinese investment in Europe, but also with a view to other continents where Portugal enjoys a privileged relationship, like Africa and Latin America,” Economy Minister António Pires de Lima, told China Radio International in Shanghai recently.

The sale of the state’s remaining 31.5% stake in the postal company CTT on Sept. 5, took the total raised from the Portuguese privatisation programme to €7.446 billion since its launch in 2011 as part of a recovery plan agreed with the European Union and the International Monetary Fund, which concluded in May. That figure excludes the €1 billion that China’s biggest conglomerate, Fosun International, paid for 80% of insurer Caixa Seguros – that money went to the state-owned banking group Caixa Geral de Depósitos rather than directly to the treasury.

”Portugal wants to position itself as the first choice for Chinese investment in Europe, but also with a view to other continents.”

Other major deals involving Chinese buyers include the sale of 40% of the power grid and pipeline company REN to China’s State Grid and Oman Oil; and the the purchase of a 21% stake in Energias de Portugal (EDP) by China Three Gorges (CTG) – its  €2.69 billion price tag represented the biggest acquisition in Europe by a Chinese investor.

For EDP’s CEO António Mexia, the Portuguese power company offered obvious attractions for its new Chinese partners thanks to its international presence and focus on renewable energy. The linkup brought immediate opportunities in South America and southern Africa.

In July, EDP completed the sale of two hydropower plants in Brazil to China Three Gorges’ subsidiary CWEI. In all, CTG will invest €2 billion to develop EDP’s renewable operations up to 2015. With European markets tight, Mexia says there’s a natural focus on opportunities for renewable energy development in Brazil and the emerging African markets. 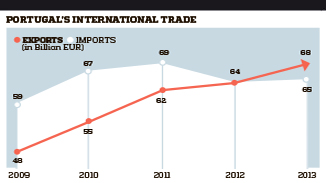 Days after its January deal with Fosun, Portugal’s largest insurance group announced it would be launching operations this year in Mozambique – one of the world’s fastest-growing economies and tipped for more boom times ahead as untapped energy resources come on line. Caixa Seguros is already a major player in oil-rich Angola through its Universal Seguros subsidiary launched in 2012 and is the market leader in Cape Verde with its local company Garantia. “In Angola we are growing strongly,” says CEO Jorge Magalhães Correia. “We bought a small company … now it’s enjoying strong growth, reaching break-even in two years”

China’s spending spree looks to be far from over. Chinese investors recently dropped out of the running for privatised waste management company EFG, but others are reported to have their sights on banking, shipping, real estate and other sectors of Portugal’s recovering economy. “Chinese-Portuguese relations are at a new historic starting point, with new opportunities and challenges,” China’s Ambassador in Lisbon Huang Songfu said in a recent speech. “The future will bring still more progress.”

“We do better when we work together”

“We are a good potential partner for a Chinese airline”